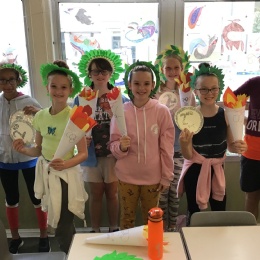 On your marks, get set, GO! We have gone for gold today during our Lumen Summer Camp Olympics. Throughout the day, we’ve taken part in various Olympic themed events. In the hall, we showcased our fantastic throwing and jumping skills. Some of us have also created some rhythmic gymnastics routines complete with some impressive moves. All of us have taken part in a dance workshop today - we were even using props today. At the end of the day, we were able to perform our routines to one another in an epic Olympic closing ceremony. It wouldn’t be an Olympics without medals galore; we used our creative skills to make bronze, silver and gold medals. Some of us even built a podium. In addition, we’ve created Olympic torches that we have been parading around camp with pride. Our laurel wreath crowns were also a big hit, taking us back to where the Olympics began: Athens. In the pool, we’ve practised our Olympic swimming and some of us even took part in races. A few of us showcased our synchronised swimming moves. We’re completely worn out and ready to spend the weekend refuelling ourselves before diving deep into the ocean on Monday for Under the Sea day.