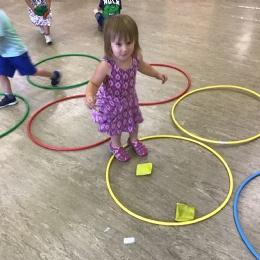 Today has been all kinds of silly fun with it being a Summer Camp favourite - Backwards Day! The rain did not dampen our mood at all; we still had an epic time. In the pool, some of us have attempted to swim backwards and even compete in backwards swimming races. Outside, many of us have taken part in backwards versions of popular sports such as reverse football and ‘slowest possible’ races. Additionally, some of us were tasked with a backwards obstacle course which was incredibly challenging but we succeeded. One group built an entire upside-down house complete with decorative brickwork and windows. Many groups experimented with symmetry printing and produced some lovely butterflies. We have giggled all day whilst trying to move around camp backwards as well as trying to say each others’ names backwards. So many of our games today have challenged us; from performing a reverse Cha Cha Slide to playing an opposite version of Musical Statues - we now don’t know which way is forwards and which way is backwards. Get ready to don your lycra tomorrow, as it is our first ever WWE day!