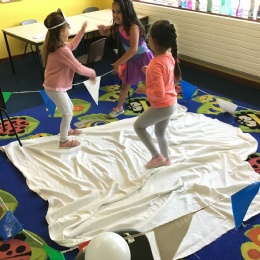 WWE day has been an epic battle. We’ve donned our masks and rehearsed our promos - we are now official wrestlers and we’re fierce! Many of us were in fits of giggles whilst taking part in a sock wrestling challenge. We were all lucky enough to take part in a performance workshop led by one of our talented members of camp staff who taught us how to get into character and even some stage-fighting moves. We then performed these to one another with some dramatic music in the background. Across the day, we’ve used our creative skills to create our own wrestling masks and costume accessories - we even made wrestling belts that made us feel like champions! Outside, the battle has continued whilst playing a range of games and sports including a wrestling themed version of ‘hot potato’ where the ball was not allowed to touch the floor. One group designed and built their own wrestling ring and another made a life-sized one in their group room that they played in throughout the day. At the end of the day, we all came together to play a group game of WWE corners where some of the greats were ‘present’: Hulk Hogan and The Undertaker to name a few. Get yourselves warmed up as tomorrow marks the return of the Lumen Summer Camp Olympics.