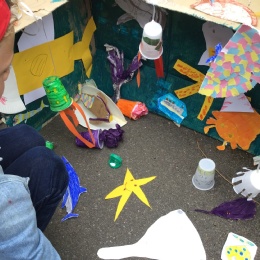 Under the Sea Day

From Spongebob to Nemo - the day has been filled with all of our favourite Under the Sea characters and creatures. Many of us have made our own balloon jellyfish with wiggly tentacles; we’ve also created crabs with clippy claws. Some of us were presented with an important treasure map where ‘x’ marked the spot; we used this to find all of the treasure that was hidden around camp. In the younger groups, we dug deep in the sand for a range of hidden items and sea creatures. Across the day, we played a variety of games including Sea Creature Snap and parachute games where we were ‘diving’ into the ocean. In the pool, we have been pretending to be a range of sea creatures including swimming like mermaids. One group built their own aquarium and invited the other groups along to see the sea creatures that were lurking (including a stingray and a shark). The playground became an ocean and many were tasked with crossing it safely in an epic game of ‘Cross the Ocean’. At the end of the day, we all came together to play a group game of ‘Swim to the Treasure’ where we had to display our best swimming moves out of the water in an attempt to reach the treasure. We will be in the presence of royalty tomorrow as it's princesses and knights day!